The History Of Enterprise Van Lines 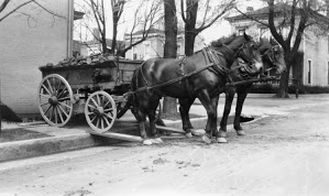 It was 1948 when a young boy helped his father move a pot belly stove and some other items of furniture from NYC to Peekskill, NY with a 14′ truck. Unbeknownst to them at the time, it would be the first recorded moving job in over 50 years in the Moving Industry. The young boy depicted in the above excerpt is Ben DeVivo, present owner and founder of Enterprise Van Lines. As part of a large family of Italian immigrants, and the youngest of 11 children. life was anything but easy for Ben. With the death of his mother at age 11, he learned to grow up very quickly, especially when immigrating to the USA where Ben and his two eldest sisters settled in New York in the winter of 1948. They would join their father already here, to work and pave the way for their family. So began the history of the DeVivo family and the Moving & Storage Industry.

When Ben turned 16 years of age, his father retired. So he began to work as a newspaper/scrap metal trader. Owning a Moving Company at that time was not even a thought. He followed in his father’s footsteps since it was the only way he knew to earn a living. In May of 1955, Benny would marry his lovely bride Norma and start a family. Ben knew that thenewspaper business would not cut the cost of a family. Fortuntately he had already established many relationships with different building superintendents from which he bought newspaper. Instead of just purchasing and removing the newspaper, the superintendents aked Ben to relocate their household goods when they were ready to move. Benny gladly agreed. In the early 1960s, he found such a sense of joy and accomplishment in doing these moving jobs that in 1967 Benny established a moving and storage company called “Benny’s Moving & Storage”.

In spite of the heavy workload of caring for the children, Norma with the help of friends was able to perform most if not all of the secretarial duties for the newly formed business. At this early stage of the business, most of the available savings went into purchasing two moving trucks. Needless to say, being able to afford a lease for office space was out of the question. To remedy that dilemma, it was decided that a portion of their home located in the north section of the Bronx would be renovated for the needed office space. As time went on, business increased and the company expanded its scope to include long distance moving and warehouse facilities for storage. So in 1970, Enterprise Van Lines was established to represent the long distance phase and Benny’s Moving and Storage would continue in the local moving aspect of the business. Eventually, all moving would be performed under Enterprise Van Lines.

The DeVivo family moved to Rockland County in 1970. However, they still kept all business operations in the Bronx. This move was not an easy choice to make. Since of one of their children, Benny Jr., was mentally disabled and living at Letchworth Village in Rockland so the rest of the family wanted to be closer. The stress of relocating a family from city life to the suburbs along with the commute to the business in the Bronx seemed a small price to pay in comparison to being closer to Benny Jr. In 1972, a government contract was established with Ft. Hamilton Base in Brooklyn to perform all types of moving, packing, and storage services for all levels of military personnel and their families. Needless to say, military personnel are people like us who can be single or have families, but have rooms of furniture and good old “stuff” just like us. This contract has given us the greatest sense of accomplishment and pride knowing that we are serving the great men and women who risk their lives every day for our great nation.

During the period between 1970 and 1983, the growth of the company forced us to move to bigger warehouse facilities. The number of trucks and employees increased during this tremendous time of growth. In 1984, Benny decided it was the right time to move all business operations to Suffern, NY, located in Rockland County. With all operations now closer to home and two of Benny’s sons, Aldo & Freddie, joining the venture, the move became a timely maneuver especially with our government contract shifting from Ft. Hamilton to West Point along with the growth and building construction taking place in Rockland. From 1984 to present, Enterprise Van Lines simply continues to be the leader in professional moving and storage services in the Rockland county area for one reason: the desire and ability to treat customers the way we would want to be treated.